For those of us who have spent countless hours looking through bins of postcards in search of something special, it does not come as any surprise that if there is some obscure subject matter card, someone will collect it. Knowing we cannot collect everything, means prioritizing our interests. For me it was easy. I love motorcycles and have for most of my adult life. I particularly love vintage machines and the postcards upon which they are represented.

I often hear the comment, I had no idea there were so many postcards with motorcycles on them. Of course when I started my collection I had no idea either. The origins of the motorcycle pre-date the Golden Age of Postcards, but not by many years. It was 1885 when Gottlieb Daimler produced what is considered the first two wheel motorcycle with an internal combustion engine. For many years prior to that, inventers were experimenting with steam driven machines.

Since those first historic days of the motorcycle industry, the subject matter has lent itself well to the attention of traveling photographers, artists, and advertisers. The material covers a broad spectrum of topics including the real photo cards that capture a moment in history and document the evolution of one of histories major means of transportation. Military postcards cover another broad area of collectible motorcycle cards. In addition vast amounts of holiday and humorous cards are available. Advertising cards are highly sought after as are any that have a racing subject. 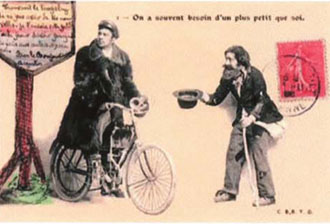 Like any other collectible, motorcycle postcards range in value from inexpensive to ìDoes anyone really have that kind of money to spend on a postcardî. In my experience, the lower priced cards fall under $15.00 each, while on the other end of the spectrum are those that will fetch $ 200.00 and up. With the range of subject matter available in motorcycle postcards it is not unusual to compete with someone who has no real interest in motorcycles. For example: Santa cards are very popular and if one is rare enough and happens to have a motorcycle on it, competition can be fierce to acquire it. As another example: I once bid on a wonderful early teens card with Buster Brown and his dog Tige sitting on a great cycle with wicker sidecar. The card went to a Buster Brown collector for over $500.00. Advertising cards with nice early representations of motorcycles range in price from $35.00 to $75.00.

The real photo cards can be a grab bag of values depending on the condition, availability and individual collector interest. Indian and Harley-Davidson cards will always bring strong interest, but a great many rarer models of motorcycle can demand a far greater price. Consider that in this country alone, hundreds of motorcycles began life after the turn of the 20th century, but only Harley-Davidson remains from those early days. The others may have been in production for as few as one or two years or as long as two or three decades, before succumbing to market pressure or war. These lesser know brands of cycles on postcards are understandably much harder to find than Harley, Indian, or Excelsior which are abundant and easy to find although not always inexpensively. 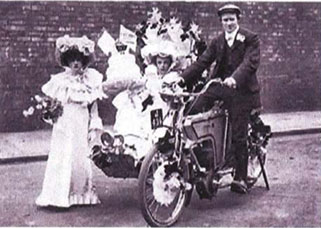 Holiday and humorous cards are the most readily available and in the greatest quantity. With a motorcycle as the subject matter, these cards are primarily found from European publishers. The Netherlands, Finland, Denmark, Sweden, England, Czechoslovakia, Germany, Latvia, Estonia, Yugoslavia, Hungary, and Romania, all contributed a great many cards in this genre. Their values tend to range from $5.00 to $35.00.

So what does one do with a large collection of motorcycle postcards? As my collection grew I began pondering that question. I kept telling my lovely wife that there was gold in them there postcards. To help justify my purchases I decided to photographically enlarge and reproduce some of my cards. This necessitated the expense of a web site which of course would be covered by my profits. (Iím still waiting). Realizing that I needed to market my pictures better, I thought I would put together a catalog of the images. As I progressed with that it became obvious that with the work I was putting into a catalog, it was not a stretch to think about a book. I felt that with a book I would also have a catalog.

Not to bore you with all of the details of which there were many, I self published a book of my collection. People ask me if it was hard to do. I tell them not if you have enough equity in your home and a bank that likes you. It just takes money and a heck of a lot of marketing. Of course understanding the complexities of desktop publishing software and learning, often by mistake, what the printer requires in a digital file can be a bit frustrating. I am now in the phase of the project where I am trying to keep up with the payments that the bank requires every month. I figure that after selling another thousand books, I should start to make some money. When you do something like this it is best to realize that the personal satisfaction may outweigh the profits. You should also consider the health benefits of carrying 7,000 lbs. of books to your basement for storage. It is very possible that there are no benefits to that. Trust me.

I would be happy to discuss the publishing process with anyone else who is interested. 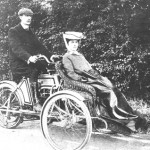 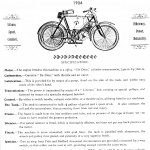 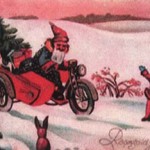